Keep up with campus and industry

"We train all segments of the industry, so we have cruise ship clients, we have mega yacht clients, deep-draft commercial clients, recreational boaters. We're particularly proud of our military mariner program, where we actually take retiring veterans and retrain them for civilian application of their skills," said Ted Morley, MPT's chief operating officer before Wednesday's grand opening festivities. "This [new] space brings our total square footage now to 61,000 here in Fort Lauderdale, so it's a big chunk of our space." 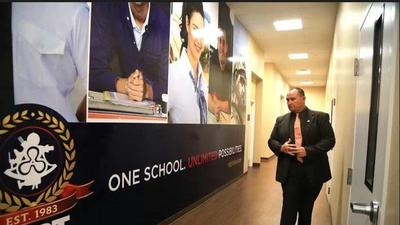 The simulators can create a variety of scenarios to test students' bridge control skills.

During a tour early Wednesday, the bridge simulators were set up to reflect ports in Baltimore, Louisiana and Malta.

"We can put [students] anywhere in the world. We've got hundreds of models and hundreds of ports that we can simulate," Morley said. "We can create weather, engine faults, issues on or off the vessel, environmental issues, emergency situations and normal situations."

"Simulation provides not only a mechanism for training but it also provides a realistic environment for assessing someone's abilities," said Morley. "It's also a great place for research."

Since opening its doors quietly about six weeks ago, the response from students to the new simulators has been positive, MPT's simulation manager Scott Field said.

"They absolutely love it," said Field, a 16-year MPT veteran and former ship captain, "Those [repeat] students, who saw our old simulation [system] and thought that was good, say this is even better."

MPT's expanded facility took about a year and a half from ground-breaking to completion. Among other signature features, it was built to withstand a Category 5 hurricane and is LEED compliant, which is a standard set by the U.S. Green Building Council for design elements that are environmentally friendly.

Students come from all over the world to the MPT facility and typically stay from a week to six months for classes, many of which are designed for continuing education. The average student will spend about $800 to $1,000 a week for training, Morley said.

"Right now, we attract about a little over 12,000 students a year," said Morley, noting current students come from about 21 countries including Australia, Nigeria, Italy, Poland, Lithuania, Spain, Romania and Canada. "It's truly an international reach because of the unique capabilities of the school."